This week I located a very rare, historical photograph of what my own research suggests is very likely the first photo of a modern-day white man wearing a Mohawk haircut to ever appear in any nationwide publication.

I believe this is the actual historical photo that started the worldwide fad.

It appeared three-quarters of a century ago in the February 2, 1942, issue of Life Magazine just two months after World War Two began with the attack on Pearl Harbor.

Because the Dartmouth Indian was the school's mascot at that time, the young Dartmouth sophomore, Bill Abrams, decided to celebrate the annual Dartmouth Winter Festival by having his head shaved bald, leaving only a bristly tuft running down the middle of his scalp.

Two of his fellow sophomores, Dick Smith and Rich Morgan, snapped a photo of Abrams' shocking haircut -- and mailed it to Life Magazine's "Photos to the Editor" section.  Smith and Morgan were very likely the ones who took an old-fashioned manual hair clipper to Abrams' head and finished it with a razor.  And history was made.

The fact that the editors found the photograph shocking enough and unusual enough to feature it prominently in their "Pictures to the Editor" section suggests that it was a sight that readers had never seen before anywhere -- an Indian scalp lock carved into the otherwise shaven head of a white man.  (Nice Mohawk, by the way.)

I have never been able to find any earlier photograph of a white man wearing a Mohawk in any nationally distributed publication.

It was a shocking enough sight that it obviously caught the attention of young men all over America . . . who loved the daring new look . . . even if few if any of them had the balls to copy the radical look at that early date.   I have talked with guys who remember seeing that photo when it first came out, and they have told me they were stunned -- and absolutely fascinated -- by the daring look.

Note that in 1942 when the Life Magazine photo came out, the shaven haircut wasn't yet known as a Mohawk, although by war's end some World War Two news accounts referred to it as a "Mohican" haircut (the English still call it that).  . 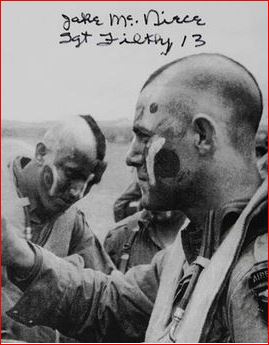 However it was a subsequent, much more famous photograph, two years later, that did a great deal more to popularize the daring Mohawk look -- especially among American soldiers.  It happened when the Army newspaper "Stars and Stripes" printed an eye-catching photo of 13 Mohawked U.S. paratroopers of the 101st Airborne Division -- wearing scalp locks and Indian war paint -- preparing for their combat jump behind Nazi lines in the pre-dawn hours before the June 6, 1944, D-DAY Invasion.

The combat Mohawks --   designed to frighten the Nazis, improve camouflage, to be more sanitary among dead bodies on the battlefield, and to inspire esprit de corps -- were suggested to his fellow paratroopers by the 23-year-old soldier in the foreground in this photo.  He was Sergeant Jake McNiece, a genuine American war hero who died in 2013 at the age of 94.

Many of the 13 Mohawked men on that suicide mission were killed or captured.   McNiece spent 30 days behind Nazi lines and received the French Legion of Honor. 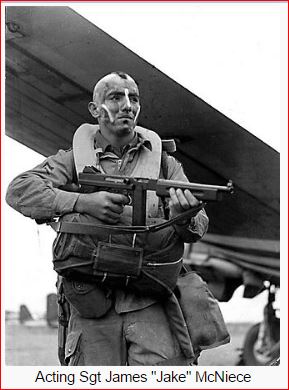 Here's another historic photo of the Mohawked McNiece preparing for the D-Day jump. McNiece said the idea for the combat Mohawks for the D-Day parachute jump was suggested by his mother, who was part Choctaw.  She probably figured it matched the famous war cry of "Geronimo" that the paratroopers for the past year had been yelling every time they leaped from the old C-47 troop planes.

But in those pre-television days, most Americans read Life Magazine.  So Jake and his mother very likely had seen that earlier Life Magazine photo of the young Dartmouth student with his head shaved into a Mohawk. So I strongly suspect it was the Dartmouth photo in Life that originally gave the idea to Jake and his mom. 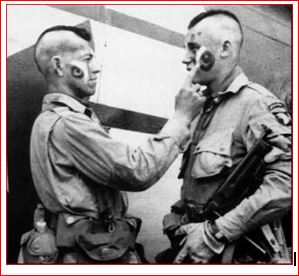 Here's the actual "Stars and Stripes" photo of Mohawked paratroopers of the 101st Airborne Division  -- the famous photo seen around the world -- that initially triggered the exploding popularity of that radical haircut.

Nine months later, American paratroopers belonging to a different unit, the now defunct 17th Airborne Division -- having seen that famous "Stars and Stripes" photo and admired the haircuts -- copied the D-Day Mohawks for their own combat jump across the Rhine River into Nazi Germany on March 23, 1945.   Here's a historic shot of a group of Mohawked 17th Division paratroopers being briefed for that Rhine River jump. 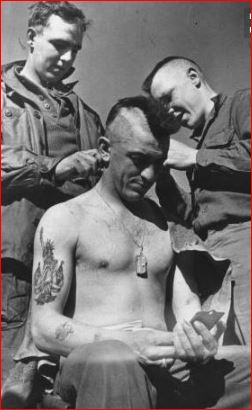 Here are two of the 17th Airborne paratroopers shaving a Mohawk into the head of a third trooper in preparation for that 1945 Rhine River combat jump.

One of the barbers has already submitted to a Mohawk of his own. And here's another of those 17th Airborne troopers shaving his own Mohawk in preparation for that same combat jump -- not an easy task with a small, metal Army mirror and a razor.

(FOR A MUCH MORE COMPREHENSIVE HISTORY OF MILITARY MOHAWKS -- WITH LOTS OF ADDITIONAL, HISTORICAL PHOTOS OF MOHAWKED AMERICAN SOLDIERS THROUGHOUT EVERY WAR BEGINNING WITH THE SECOND WORLD WAR -- CLICK ON THIS LINK TO MY BLOG TITLED "THE SECRET MILITARY HISTORY OF THE MOHAWK" WHICH APPEARS ELSEWHERE ON MY PAGE ON THIS WEBSITE.)

So by the time the end of the war arrived in August 1945, numerous newspaper and magazine photos of Mohawked American paratroopers had turned that shocking haircut into an indelible symbol of macho masculinity -- the symbol of an American fighting man. 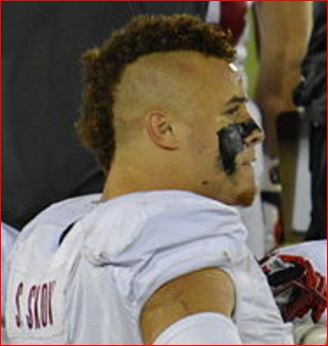 And when peace came, high school and college football teams began copying those paratrooper Mohawks as a symbol of team spirit and as a team bonding ritual -- followed in later years by professional football players.

I said the Mohawked Dartmouth College sophomore in the February 2, 1942, issue of Life Magazine was probably the first "modern" white man to ever be depicted wearing a Mohawk in a nationwide publication. But I qualify that statement by adding the word "modern" white man.

Actually, the very first white man to ever get Mohawked happened 238 years ago, and his name will amaze you.  .Are you sitting down for this? 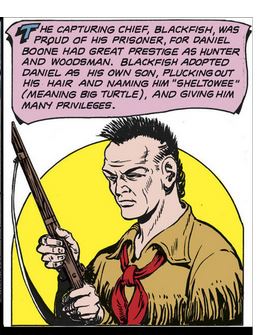 It was the famous early-American frontier explorer, Daniel Boone.  You've always seen Boone depicted wearing a coonskin cap.  But, believe it or not, the American Indians once forced him to submit to a Mohawk haircut, and he actually wore it for several months during his Indian captivity.  Here's how a Classics Comics back in the late 1930s or early 1940s depicted Boone's historic Mohawk.

It happened to Boone in 1778 during the height of the American Revolution.  In the wilderness area now known as Kentucky, Boone was captured by Shawnee Indians and adopted into the tribe to replace a fallen warrior.  In order to be adopted, he had to undergo a tough initiation.  First he had to run the gauntlet.  Then he had to submit to having all his hair plucked out (ouch!!!) except for a bristly tuft down the middle of his scalp. Man, that's doing a Mohawk the hard way.

But then, so far as I can tell, there was apparently a century-and-a-half gap before the next white man got Mohawked -- namely that Dartmouth College student in February 1942.

This is a super-abbreviated account of the history of the Mohawk haircut, which I have posted here merely as a way to unveil my discovery this week of that historic 1942 Life Magazine photo of what may be the very first modern-day Mohawk.

For a much more detailed accounting of the haircut's history -- with more than a hundred historic photographs of military and civilian Mohawks -- , click on the two accounts below which are posted elsewhere on my personal page on the "Mohawks Rock" Website.  One is the civilian history of the Mohawk, and the other is the military history of that haircut.  If either link fails to work, just go to my personal page on the "Mohawks Rock" Website -- I'm listed as "Scalped 442" --  and you'll find the two accounts listed there.  .

THE STRANGE, SEXY CIVILIAN HISTORY OF THE MOHAWK.   (On some links, this is listed  alternatively as "What Will People Think If I Get Mohawked?"

THE SECRET MILITARY HISTORY OF THE MOHAWK.