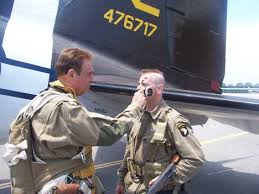 At the American Air Power Museum’s 70th anniversary reenactment of the paratrooper combat jump during the D-Day Normandy Invasion of June 6, 1944, reenacter Billy Tucci shaves his hair into a Mohawk to recreate a world-famous famous news photograph from the original D-Day combat jump. That famous World War Two photograph showed a Mohawked paratrooper of the 101st Airborne Division having Indian war paint applied to his face to match his warrior haircut, as he prepared to board a WWII-era C-47 troop transport plane behind him for his parachute jump into history. Of the famous "Filthy Thirteen" paratroopers who made the Mohawk haircut world famous, only four survived the war.

Tucci surprised his fellow reenacters by showing up with a Mohawk haircut. “Being a former paratrooper myself and knowing a thing or two about the soldiers of WWII, I gladly lent my services in an attempt to educate the public of the sacrifice of these wonderful boys who saved the world over 60 years ago,” Tucci said. “But I had one request, and that was to come as one of my own personal heroes, the infamous ‘Filthy Thirteen.’” Led by Private Jake McNiece, a Native American from Ponca City, Oklahoma, the “Filthy Thirteen” were the inspiration of the film The Dirty Dozen. Tucci said part of their notoriety came from photos taken of them chuting up for D-Day since they had given themselves Indian scalplocks and applied “war paint” to their faces before jumping into France.