I went to Horns & Halos' Zombie Ball and the hawk flew for the first time in months! It's about 10 inches now and solid black. I put it up into four liberty spikes for the ball.

I used half the water I normally use.

I put the water in a mug and heated in the microwave for 55 seconds. Right after, I poured in the Knox packet all at once. It took about 5 minutes of stirring with the spoon to dissolve the… Continue

I've created a group for people who use Knox Gelatine in their hair.

Not sure how to spike your hair with gelatine?

I was at work the other day and I noticed something while surfing the internet. During a conversation with a coworker about my mohawk and how I get it up, I brought up a Google search for Knox Gelatine.

My hair is currently RED and chin-length. I keep forgetting about… Continue

I haven't put my hair up since that last blog post. =(

I haven't had a haircut either. The sides have grown out to an inch and a half. I need to get a trim, and re-bleach the middle.
This mohawk is the thinnest one I've ever had, it's about 2 inches wide... It's also approaching being the longest I've ever had.

I'm not sure how this is going to affect the Knox process of putting it up, but when I finally get the sides trimmed, I'm going to attempt making more of a gel… Continue

If you've got a mohawk and need to spike it, check out the method I use. It's hard to find information about this kind of thing, so after lots of trial and error I've started working on this HowTo. I'll be editing it as I find out ways to improve upon it. I also will try to get a video HowTo, as soon as I can find a camera.

KILLER SPIKES: Knox Gelatine and YOU

For huge spikes, Knox has got to be the way to go. 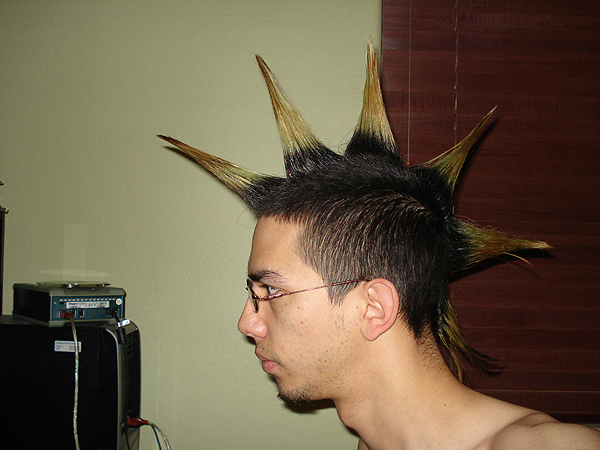 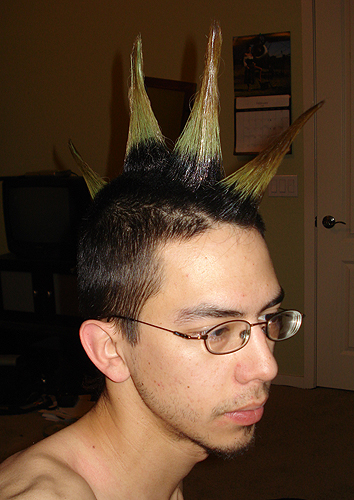 It's day 4 of having my hawk charged with Knox using the method I described in the forums.
On day two, I used hairspray on the base of the spikes to reinforce.
After that, no touch-ups.

From the pics, you can see what happened with using blue food coloring in the Knox mixture. It just made it look like I went swimming a lot. Next time, I will try half the water and double the food… Continue

The food coloring made the consistency of the Knox mixture a little too watery, and my bathroom got so messy from it. I think, if I use food coloring, I should use MORE of it, and not use as much water. Also, I used blue food coloring, and by the time the hawk was up, my bleached hair was more of a pukey light-greenish bleached-type hair. Not blue.

In short, adding food coloring to Knox gelatine is messy business, indeed. I'd almost rather never try it again.

Tonight I'm attempting to use my soon-to-be-perfected Knox routine, but I've added about 25 drops of food coloring to the mix. We'll see how this turns out.

I just spent about 20 minutes at youtube.com/fordmodels because of an ad on the MR homepage...

From fake punk rock hairstyles to a segment on "bringing back the bun," I learned way more about trendy hair shit than I thought I would today.

I need to get away.