I made a journey up to see my cousin Brian's beautiful Montana wedding this summer. While up there, I was talking to his brother Todd about my mohawk and the different techniques that I have tried. During this conversation he mentioned that while working up on a ranch last summer they used a product that was basically hairspray for cattle. This intrigued me, and he called up the next day with the name,
Sullivans "Prime Time".

So a little trip to the local Quality Supply and a little hunting finally led me to the magical green can. There it was. Strong enough for a cow but soon to be good enough for a man.

However, two things disturbed me about my new soon to be purchased magical can.

I thought, hmm, well this is Montana. I'm safe to use it here then.

2.) Can only be removed by antidote, Sullivans Hocus Pocus.

Antidote? What! Really? Nah. Now I've tried just about everything from toothpaste to Elmers Glue, and have been just fine washing it out. Besides, if its that bad, I'll just come back and grab the antidote.

So its my last night in Montana before flying to of all places, 'California', and its time to let the kids see their uncle Cheyenne's giant mohawk, and time for me to test the Prime Time before heading to California, where of course it could cause me to have cancer.

Where to start and spray? Hmm, I think I'll just stand kind of upside down in the backyard where everyone can see and grab a strand of hair in the back, pulling straight up with the blow
dryer connected to a big orange extension cord. (If this ain't mohawk meets country?)

The moment. Spray. Swish the can explodes in what looks like elmers glue coming out of a pinhole punctured oxygen tank, so quickly it makes like a liquid spider web instantly coating the strand I'm holding, my hand and more of my hair. Holy crap! This stuff is going to be awesome! But wait, its instantaneously causing my hair to bundle and matte upon itself.

Thats ok, I'll just wash this out, lay down and more properly do this. But, alas as my brother points out moments after the matting spider web of liquid elmers glue is ratting my hair, "Uh yeah dude. Quality Supply is totally closed, stores don't stay open that late in Montana." Drat! The antidote. Drat! My plane will leave before the store even opens. No Hocus Pocus the Joke is on me.

A mad dash into the bathroom to soap, shampoo, water and wash the matting nest on my head. Too late, might you ask? maybe. Some was washed, some remained for 4 days, until eventually the california water and sun finally worked the last bits of Prime Time out.

Fortunately I still had plenty of a can of Prime Time left to try the experiment again upon my return home. However, what did I find after opening my bag in San Diego? Yup. A note from the good old U.S. government TSA. Sitting right next to my untouched cans of Got2BeGlued, the note said, they had to confiscate an unapproved volatile substance from my bag, and that it would not be returned to me. 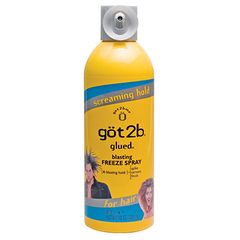 Moral of the story being. Don't trust the TSA not to steal your most prized posessions, or perhaps that maybe, when cancer, cattle and antidotes are all involved in the making of a mohawk, maybe its time to just stick to good ol' tried and true Got2BeGlued.

Comment by Morticia on February 20, 2008 at 10:41pm
Hey, I know someone in MT right now and they could get you some Prime Time and antidote if you wanted.
Funny article!!