Well, the site's nearing its fifth year anniversary and I thought I'd go over some good memories of the good folk that've been here.

Of course, naturally, with me, I'll add in a little insight into my weirdness for sneakers & boots for the fun of it. :)

One of the real stars of chat on the site, from years ago, Fuzzy Commie (who as the nick suggested had his own separate definition of that).  He was always in talking to everyone, every day really, kept the chat active.  We never did see him put his 'hawk up, but even after everyone else had given up on him ever showing his promised face in pics, he finally did after 6 months.  And along with those, he showed off wearing his custom painted chucks he'd done.  A really great job of red spray and yellow hand painting on a pair of pure black cons, which a lot of people liked from the comments, even though he did them for me, they actually gained him a lot of respect.

Then, one of the regulars in chat, Dreaded - often a quiet one, but at times a good laugh.  The Australian shone through both in his clever chat 'accent' spelling and in some of his sunny pics.  His sneaks were a really rare type with random swirls of black on the cream canvas and black laces with white eyelets - except for the top one which was red.  Plus, the patch was inverse - which all made up a pretty cool look. 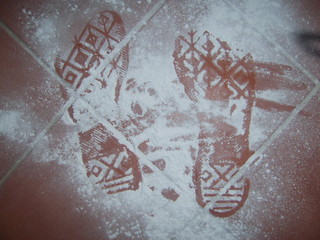 The way the pattern swirls were, you could imagine shapes of strange monsters & other things, just like looking at clouds.

But there was one time, while chatting that I mentioned that I liked seeing print patterns left in snow or from the rain and he said: 'Just a minute...' and did the pic that was the most unexpected and best pic I've ever got.

Without saying he'd sprinkled some talcum on the bathroom tiles and left his prints in it.  It was a surprise and made an awesome desktop background for me. :D  And also, just bothering to think of doing that idea was cool.  All-in-all, it ranks up as probably the best, along with a skateboard shot a couple days later, where you could still see his talcum prints coming off on the board & floor still. :D

Gibby was for a long time very busy on the site, always posting new pics of his 'hawk and he had a great way of showing real character and energy in photos.  He was a bit of a collector of chucks and just one time, he agreed to do a set of pics for me wearing his green chucks.  They are some of the most fun shots on the site and along with his blue 'hawk, are one of the few who managed to show them with the mohawk up.

And now to the opposite side of the world, there's Kocii, with 'Pure Trash' boots, that looked like big Rangers and him and his friend managed to get some neat shots of them crossed and the soles - which made them look like a giant looking at the camera  Sadly, taken on one of those days inside when the mohawk was swept down.

For a while, Amps was around, he had some really cool white-striped ('skunk') black converse hi 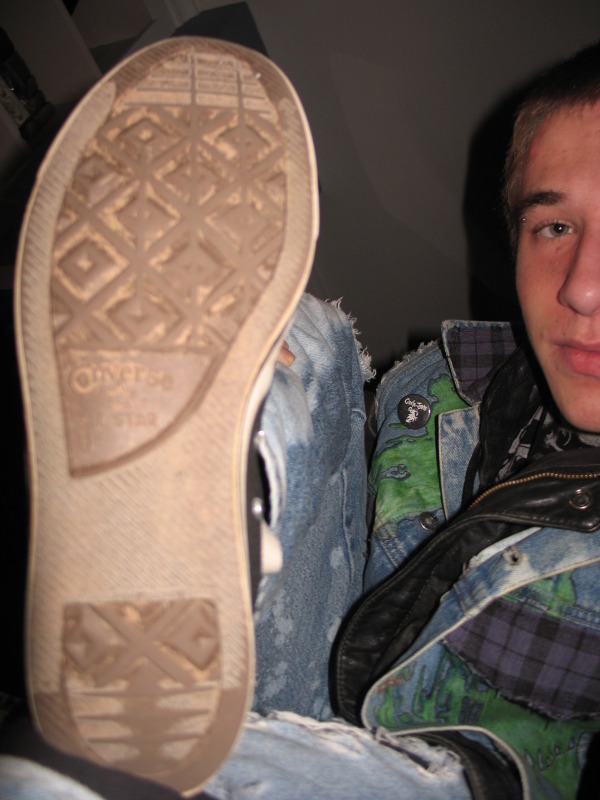 gh-tops and he managed to come up with a clever way to show the sole of his sneaker in shot beside his face - in some amazing way from arms length.  I'd never seen that done and that made that shot pretty special.  It always appeals to me to see someone's face - I like the character and expression in someone's photos.

Ah, yes, Du_can the Tu_can, almost didn't do any pics, but then took pity during a time of ill-health in my family and cheered me up with great shots of his Pink Floyd black converse with a prism with a white stripe splitting into a rainbow on them.  And as a drummer, he took some cool close-ups with them on the pedals and some of my fav pics another time, doing a time-lapse type shot stepping forward and lifting off - where the white-line heart-beat trace along the black outsoles could be seen.  Most I liked about his shots, were his ragged striped trouser cuffs and replacement red laces which went so well with the black high-tops.

ForeverDown, a perfectionist at heart with his mohawk, always striving for that perfect fan - which he got down many a time.  What are the odds?  But he too had a sneaker fetish, probably different than mine, I think, but out-of-the-blue on one of my earlier blogs about me liking sneakers, he posted a few shots showing off some of him wearing three pairs from his collection.  Along with a pair of standard hi-top cons with black laces in just perfect broken-in condition with a bite somehow torn out of the rubber outsole, that made them unique.  Plus, they were just great natural shots, one foot sideways, the other straight on.  I always like just ordinary stuff like that.

Ox has one of the best liberty spikes on the site and along with his huge boots, he did a cool shot sitting with his ox-blood docs to camera a 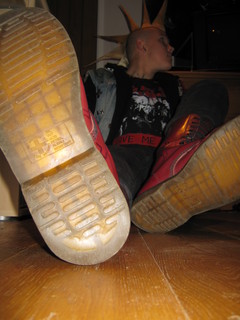 nd the liberty spikes side on.  I got to see the soles close up which was cool, even though he'd forgotten I'd asked to see his Grinders from his collection. :)

Now, Daniil, he took a long time - about 3 months, before finally taking some shots of his boots.  They were some of the best Rangers, and what I liked most about those pics (even though he wasn't even wearing them), was that he must have just come in from the snow, 'cause they were ringed with it, all along the outsole seam.  Along with the matching white laces and angles with the shine on his boots, made them pretty smart looking.

tAnk bOi tEh bArd, just a one-off pic, but a beaut of an angle on his work boots (one stretched out) and glued on steel toe-caps, showing him in all his piercings and 'hawk style.

Drunken Punk, still around, had some pretty rare Grinder boots and although sadly he took around 8 months to finally take a pic showing the cog tread's (which by that time were worn flat), the pic of him sitting and his attitude in it with one boot facing the camera and green laces, was cool.

Sonny, a second person with Grinders with slightly more tread, managed to do a couple pics with them on and will probably be the last person with the original style of those since they've changed manufacturing materials.  Although dark and their face down not looking to camera, they still were nice to happen.

And finally, to Sandman, single handedly the best person for taking pics wearing boots and a mean can stomper too! :D  One of the few skaters to show off his board too with them.  I remember one night on MSN he had 3 cans and *crunch* flattened them in one step - that was impressive!  His boots were 10 eye, steel-capped docs with some replacement white laces he asked me about length, (I measured my own and then hunted down some suitable ones online that'd fit).  He bought them and showed me how he laced them up in a smart ladder way.

He could fold up a big plastic bottle until it was completely hidden under a single boot and you'd never know it'd been there.  That and his style made great times and full of good laughes. 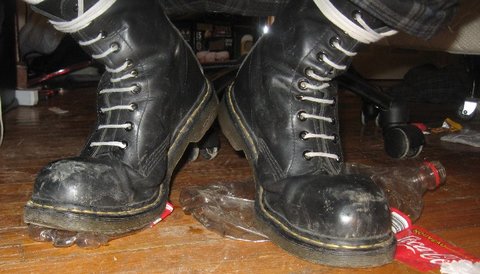 All-in-all, that's some of my memories from the last 5 years here.  I'd like to thank everyone for putting up with me and my random interest in stomping boots and sneakers. :D  And if you read this far, thank you.  You may never understand me, but you'll always find me open & honest he

Comment by Bam on November 19, 2013 at 11:12am
I was just saying I haven't logged into thos site for about two years and i don't know why not i love it. I met a long distance (now ex but we
Keep in touch) boyfriend on here and also flew alone from Bristol to Berlin when some people i met on here flew from Denmark to berlin and we had a massive drunk week there. I know the internet can be a dodgey place but You gotta have some flaith in people sometimes!

Yes, I've met I think  two people from the Internet and they were perfectly nice folk.  People at the end of the day seem to be much the same.  It's always good to meet folk in a public place with other folk around.

It's not so much dodgy folk on the Internet that I find disappointing, it's those who just can't bother to stay in contact for more than some months.  Though, sometimes you do find those who stick with you through thick and thin and still bother to stay in touch.