Top 10 Mohawks, The Most Noticable Today

10 Mohawks, The Most Noticable

So as 2007 draws to a close, I decided to write about the 10 most noticable mohawks I know. I'm sure there is a U.S. bias, but with this article I hope the rest of the MohawksRock.com nation will add contributions that I may have skipped over. Which leads us into controversial number 10.

Thats right, I'll throw myself in at number 10. I'm sure and I hope that this pick will stoke the readers to point out much more notable mohawks making this pick the sacrificial lamb. However, this is my top 10 and the category is "noticable". Standing at 6'11" (210cm) tall and my mohawk towering well over 8 feet (2.5 meters) tall, my mohawk is definitely the most "noticable" mohawk I know. 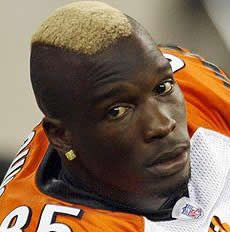 While Ocho Cinco's mohawk was somewhat short-lived, it was still curiously the talk of the National Football League (NFL) for quite some time. Obviously his brasen personality and contrasting blonde mohawk helped set him apart from others like the Washington Redskins Clinton Portis, and lands him in the top 10.

Ultimate Fighting is growing in popularity and so is its crowned bad boy, Chuck Lidell. His mohawk isn't huge, but it sure is intimidating, or maybe its his (20-5) record, championship belts and ability to knock your teeth down your throat. Either way, The Iceman Cometh in at #8. 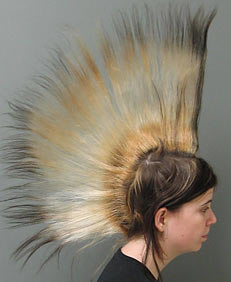 Her story took legs in March 2007 after police brought her in to the station and had a tough time getting her impressive mohawk into a mugshot. I must have received a hundred emails that day about this story, and upon somewhat following it up the details are sketchy as to what happened and why she was even booked. Some say her mohawk was sticking out of a sunroof as she drove alerting the police to arrest her, but whatever the cause or reason, this is definitely a great mohawk, and I hope her troubles area all past her by now.

The wrestling worlds "prince of punk" sports a resistant mohawk that stands strong through all of the stunts he has to pull his high flying crowd entertaing style. Whether idolizing Jeff and Matt Hardy, watching The Hardy Show or performing his magnificent top of the ring post moonsaults, Shannon definitely makes it into the top 10. Join Shannon Moore's MohawksRock.com Fan Club.

5)Tim Armstrong - So Punk it Hurts

As we reach the top 5, we certainly can't have mohawks without the punk influence. Tim Armstrong definitely leads a true to life punk charge with a great mohawk, frontlining notable punk bands like Rancid and The Transplants. 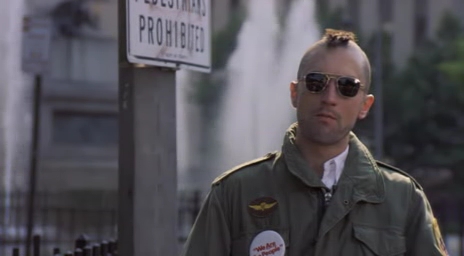 While Deniro himself, isn't really noted as having a mohawk, this story is about noticable mohawks (not necessarily people). Time and again when talking to others they point to the critically acclaimed Scorsese film, Taxi Driver, when they see my 'hawk. After watching the film, I was dissapointed that it played only a minor role, time-wise, but its edgy, half-cocked and shaved look is highly important to the message and the mood of Deniro's character in this flick, landing it as a top 5 mohawk. 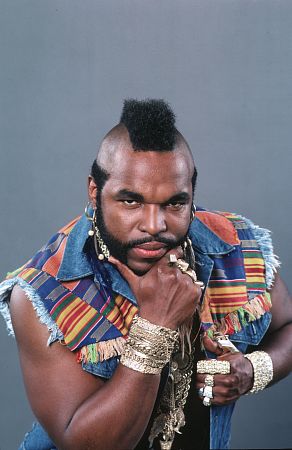 "I pity a fool!" Thats all you need to hear to conjure up the image of the one and only "Mr. T". Whether he's B.A. "Bad Attitude" Baracus of the A-team or Clubber Lang in Rocky III or just himself in the World of Warcraft's new commercial featuring T and his Knight Elf Mohawk, Mr.T is brings gold chains, mohawks and one letter names to the Mohawk Hall of Fame. Join Mr. T's MohawksRock.com Fan Club. 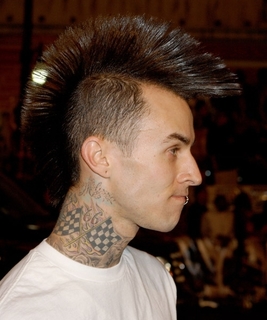 Even his impending death hoax only fueled the fire behind Travis Barkers growing fame. Formerly of Blink 182 and now +44, Travis sports one of the most fashionable mohawks on the scene. His MTV show "Meet the Barkers" with his former Miss USA wife Shanna Moakler sparked punk and mainstream media together, therefore carrying the mohawk and its newfound glory into the #2 slot. 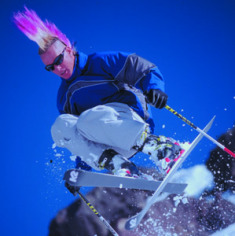 Glen Plake? Number One? Really? Yes! I would not have guessed it either, but everywhere I go, tops and beyond, people wonder if I'm either into extreme skiing or even indeed actually am Glen Plake, himself. Now, thats a compliment for sure, even if I haven't met the man. Everything I read on him, says he is extraordinarely nice, down-to-earth and 100% respectable and into his sport. I attribute his personality Warren Miller and countless hours of impeccable video of Glen's skiing documented in the HDTV (High-Definition TV) to his fame. I know most people want to associate the mohawk with antidisestablishmentarianism and(wrong use of word, see Venoms comment) bad ass attitudes, but Glen is the opposite and just into expressing himself and life in a different fashion. Brilliant Marketing? Maybe. Genuine. Yes. Number One. Indeed.


And thats the top 10 most noticable mohawks by my records. If I've left out your favorite mohawks, please leave your comments or create your own top 10 on MohawksRock.com

Comment by Bob on December 21, 2007 at 11:17pm
I vote for everyday Joe or Jane. Wearing a 'hawk, particularly in the working world, isn't always easy or accepted. But it does show a bit of independence and free thinking. Society is at a point, much like the late 1700s and 1800s, where new ideas and inventions are required if we are to forge ahead to explore new frontiers. So I vote for the average everday wearers of mohawks who tend to think out of the box.

Comment by rocknthehawk on December 22, 2007 at 2:04am
Just wondering, are you claiming to have the tallest mohawk, or be the tallest person with a mohawk? I was confused...i saw you're at 16"? thats a foot short of the guinness record.

Comment by Giant Mohawk Man on December 22, 2007 at 11:46pm
I certainly wasn't claiming the biggest mohawk. Just saying that length of mohawk combined with my height had to put my mohawk as the most noticable I know.

However, just now checking out your pics I am completely amazed. That 'hawk is awe-inspiring for sure. What is your record anyhow?

Comment by rocknthehawk on December 23, 2007 at 12:03am
the current record is at 24 inches, but that was measured a year ago

Comment by Rbiker666 on December 23, 2007 at 1:03am
Personally I think everyone should Hawk it up at least once in their life
btw i vote for mine because i am in the public eye daily
and everyone watches us Truckers when we go anywhere

Comment by Venom on March 9, 2009 at 5:58pm
As a punk, I disown this list. I personally want to kill half the people on it, and most don't even belong on it! You're slipping, GMM.

BTW: "Antidisestablishmentarianism" means "Opposition to the withdrawal of state support or recognition from an established church, esp. the Anglican Church in 19th-century England." If you are going to say stuff like that, please do a background check.

Comment by Giant Mohawk Man on March 9, 2009 at 6:12pm
Ah. Thanks for the catch on Antidisestablishmentarianism. I did just look it up and I had it completely backwards. I've stricken it from the article with credit to you Venom.

As far as the list, it was written to signify "noticable" mohawks and not necessarily "punk" mohawks. It was also written only a month into MohawksRock.com being live. I've certainly learned a lot more about everything mohawk-related from this group. I have been working on a 2008 list, but keep getting sidetracked.

I'd invite you to write up a top 10 "punk" mohawks list. I think it'd be a great read, and it sounds like you'd be more equipped to put it together anyhow.

Thanks for the catch on that word, I am glad to know I won't incorrectly use it like that again. Corrections like that are what make the internet great. I know if I steer wrong, someone will catch and correct me. :)

Comment by Venom on March 10, 2009 at 9:41pm
So true, dude. I realized that this was created by "noticable" order, but I don't think short ones like the Iceman's count.

As far as creating a "punk" one, I'm not so sure I'd be suited for it either. I see a job like that requiring MAJOR knowlage of all punk bands and noticables. While my life is based heavily around music, and I fancy myself pretty knowlageable(SP XD), I'm not sure if I could give credit to all who deserve. But I might complie a "Venom's List" of 'Hawks.

Anyway, your welcome for catching that whole "anti" thing (after seeing SLC Punk I wasn't to sure what the word meant either ;] ) and be sure to keep up the good work!

Comment by Jay-Jay on April 30, 2009 at 10:40am
tim Armstrong should NOT be at number one, it's tiny just like Travis Barkers, but at least he's a household name so i can accept it
I think this list is pretty pap, who the hell is Glen Plake??
I think that hair changes so much, is dyed and re-dyed so much, stuck up and flattened down, on famous people or just people like me.. opinions will destroy any list and nobody will ever completely agree but where the hell is Robbie Sinclair from tv series "Dinosaurs" (1991)?????