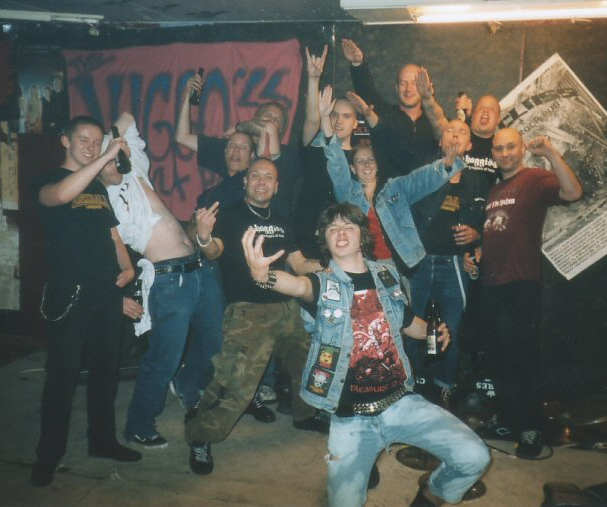 Here`s wattie posing with the band haggis(notice the sieg heiling), apparently they`re close friends(just check their last.fm) I`ve heard a lot of shit about haggis, I don`t know whether they really are nazi or not, but song titles like " I work like a nigger" kinda makes you wonder. Some call it irony, but I don`t really know. They`ve been on stage with RAC/nazi bands. Wtf wattie.

So what are your guys opinions?

yeah wattie is a nazi. fuck that guy.

he`s a fucking diva too.

Permalink Reply by Somber on June 3, 2012 at 5:55pm
I never really cared for the exploited in the first place, the exploited have been circling the drain for a while. Seeing this kinda killed any intrest I had in them.

well if they adamantly claim not to be nazis then i guess im nobody to call them liars, but they are only doing it for money. so theyre capitalists. so theyre just as bad.

They're just making a living. I very much doubt they're getting rich off selling records and touring. The Exploited were never a band with any sort of strong message. I think The Exploited (and many other older bands) are not so much "selling out and getting rich", but instead touring to make a living AND because they enjoy playing their songs in front of a crowd.

I am not a fan of the Exploited (though I enjoy the occasional Exploited song), but it is absurd to put the Exploited in the same category as bands like KISS.

On the topic of Wattie: the guy seems more like a bit of an idiot, and less like a nazi.

I hear often from people that Wattie is/was a Nazis, but I'm sure it's not something he's going to promote.  I do enjoy the Exploited, a lot. But there's just something about this band, and I'm not too sure what, that I don't go boasting about them like other bands I enjoy...

And isn't Wattie a little... tanned in skin tone to be all White Power Ranger?

I've heard a lot of rumors, both about Wattie and other bands, and I do most certainly not know what to believe anymore. And I don't care anymore. Unless they come up in public, claiming that they are full-blood Nazis, then I'll believe them (also because THEY said it, about THEMSELVES). But, as the link Sick Boy wrote in his comment, they claim not to be Nazis!!! And since they claim, about themselves, that they're not Nazis, I believe them. Who are we to judge Wattie? I have been "sich heiling" myself, just for fun. There are pictures as well, but that doesn't make me a Nazi, just because I felt like stretching my arm as a picture were taken.

I am sick and tired of rumors, and I don't believe them, as said, before the person the rumor is about is telling is if either it's false or true. I enjoy The Exploited a lot (I also hooked up with my boyfriend at one of their concerts, so they kind of mean something to me in that way, you know, memories), and I am going to Punk & Disorderly again next year, because they are playing, and I'd like to see them live again because I like The Exploited!

I rest my case.

But Haggis are brutal. I don't know either they are Nazis or not, but they played at the same concert as The Exploited, the day I hooked up with my boyfriend, and they are giant boneheads.

Also, just noticed that Wattie isn't even saluting on the picture... get a better proof that he might be a Nazi, then.