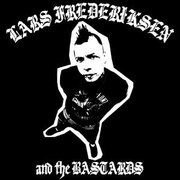 a fan page dedicated to Lars frederiksen and the bastards. mainly to lars and all he's done

Lars Erik Frederiksen (born August 30, 1971) is a guitarist and vocalist for the punk rock band Rancid, and the frontman of Lars Frederiksen and the Bastards. He is also notable as a producer, having worked with the Dropkick Murphys, Agnostic Front, GBH, Swingin' Utters, Patriot, Union 13, The Forgotten, The Gadjits, Pressure Point, and The Business. He joined Rancid in 1993 after the band was searching for a second guitar player and was present on their second album Let's Go. Lars' surname was originally Dapello after his father, who abandoned his family at a young age so he took his mother's maiden name, Frederiksen. Lars had an older brother named Robert who died in the early 2000s from an aneurysm; the song "Otherside" by Rancid was written in memory of his older brother.

Frederiksen is half-Danish, his father was Italian (his mother, Minna, was a Danish immigrant) and was reared in Campbell, California, a town near San Jose, California. The sixth track on his 2001 album, Lars Frederiksen and the Bastards, is titled "Campbell, CA." [1] He is a notable drop out of Westmont High School.

His mother came to the US as an immigrant, barely able to speak English and with very little money. Lars' father, John Dapello abandoned the family when Lars was just 3 years old. Life was a constant struggle for Minna and she worked two jobs to try to support her two sons; Lars and his older brother Rob, who was four years older than him. However seeing his mother struggle gave birth to his survival instincts for later in life and instilled in Lars a working-class punk rock ethic. His first introduction to music was by his brother, who introduced Lars to punk as well as cementing his early rabid fanaticism for KISS. Lars' brother Robert died in 2001, and this is referenced in the songs "The Viking" (Lars Frederiksen & The Bastards) and "Otherside" (Rancid). On August 31, 2006 (a day after his 35th birthday) Lars suddenly collapsed onstage at a Rancid show in Montreal. He was reportedly taking antibiotics at the time for an upper respiratory infection.[citation needed] The collapse and seizure resulted from a combination of fatigue and a methamphetamine drug reaction. The band had to cancel four shows, but continued the rest of their tour as planned.

He later learned to play guitar both by pausing fretboard close-ups in MTV rock videos and from the former guitarist of San Jose glam rock band The Shattered.

He married his girlfriend Megan in 1998. They divorced, and he is now very happily married to Stephanie Snyder, who gave birth to their son, Wolfgang Erik Anders Frederiksen on September 11, 2007.

SKUNX
Lars Frederiksen has "SKUNX" tattooed on his forehead by world famous tattooer Tokyo Hiro, who is also a member of Skunx. Skunx is a crew that Lars belongs to, led by Gordy Carbone and started by Brent Callahan and Sean Denham who Lars got his first punk record from. SKUNX stands for skinheads, punx and drunx. Skunx has active chapters in Moberly, Missouri; El Paso, TX; Las Cruces, NM; Montreal, East Coast, and London, UK. The original core members from the late 80's all met at the Tinker's Dam in San Jose, and all have the same "S" shaped brand or SKUNX tattoo. He is also a member of U.S. Thugs as it is tattooed on his stomach.

Thought this'd be a good place to ask this, how do I get my Mohican like Lars'. Particularly around the first Bastards album (check the 'To Have and to Have Not' video to see what I mean), how do I…Continue

You need to be a member of Lars Frederiksen/and the bastards to add comments!