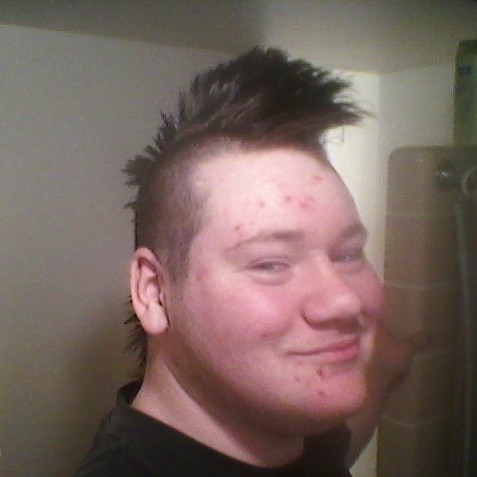 Patches has not received any gifts yet

I'm Not a Non-Conformist I'm Just Doing What I Want

Mohawk Status:
Rocking now, Rocked in the past, Thinking about rocking it sometime, Just like watching others rock them

About Me:
I'd like to say I am a pretty well rounded individual. I work in an auto shop as a manager(basically a mechanic that has to do paperwork and whatnot). Needless to say I love cars. I often go to car shows and meets to race, check out sweet cars, and hang out with friends. I also love music and can be found at shows of damn near any genre but punk is my favorite (go figure). I am very loyal to my friends and family and would do anything for them. And if I am not doing any of the above I'm probably at the gym or sleeping. Anyhow I love meeting new people and doing new things so feel free to add me and that's about all I feel like typing as nobody is likely to read this so if you want to know more just ask :)

How Tall Are You With and Without the Mohawk:
6' without and roughly 6'3" with

So today I went bowling with some friends who were in town for the holidays, and this girl who also had a Mohawk caught my eye. I noticed her staring because she was only a few steps away so I complimented her on her Mohawk because it was a cool color turquoise and she just gave me the cold shoulder and walked away. I am certain she heard me which makes me wonder either how I went wrong or why she didn't have the decency to say thank you or even a smile. I don't know maybe I am just… Continue

Today me and my brother were in the car and saw a man who was down on his luck, so we pulled over and gave him what we had to help brighten up his Christmas. We talked for a few minutes and we found that he is a really nice guy who got delt a rough hand. He proceeded to say "God bless you and have a very merry Christmas I wasn't sure when I would get the chance to eat again", he shook my hand and started walking again. Which made me think if the little that I had could make a difference why…

Here Is The Link

No, I never mean stomp 'on' the phone, it's 'above' the phone - no damage taken to the phone, instead picture taken to capture the imagined action of stomping. haha  But I never asked you for that - it was a lot simpler just to take a pic wearing them rested one foot on your knee to show your black, blue & orange basketball shoes' style of tread. :)

Anyway, doesn't matter, I was just curious to see what you had back then in July - no need to go outside either for that.  It's more about whether someone bothers or not to me than anything - it's the thought that counts, as they say.

Nothing worth talking about.

heh The 'busy' guess came tops!  I see 'fear' was the word you rejected most.  Interesting - I didn't mention that, it's the one of those most frustrating things to think that you're feared for being different or misunderstood, when you can't see the logic or problem.

Gotta say, at times I still try and connect in the hope of finding someone reliable and easy-going enough to deal with having fun showing off or eventually stomping with their boots/trainers. heh  But at the moment, it seems a bit theoretical again.

Yes, a long time...  When you didn't reply to taking a picture of some of your collection of sneakers on, I assumed you felt uneasy or months later thought it might be like a nuerosis(a feeling of invisible injury) to showing your sneakers to someone 'cause they asked and you know they like seeing that.

I'm guessing, but that actually makes a lot more sense than most of the excuses folk usually give of broken cameras, busy, etc.  I actually wanted to find out more recently if the idea of nuerosis was true, but I expect asking folk who have that, won't get them to admit it. =]  Folk use excuses to shield themselves, even when they are see through.  Though it'd be much more useful to understand, if it's just an irrational response, they feel it's easier just to avoid.

TBH, I wasn't more than mildy curious to see your skater sneakers.  I suspect your style is not mine.  Now-a-days I've also lost faith in folk bothering and I don't look for that joy of gratitude feeling.  Obviously I don't trust someone to turn around and change when I don't know what's going on in their thought processes.  Still, thanks for the comment, it let me theorise :) and if you can shed some light on a theory on 'why not', that'd be good to know.   Either way, have a good day! :)

lol no offence directed at you. i just hate the racism that comes with the cowboys and their tunes. but thats awesome that you know what you're doing as far as work goes. i really hate cooking for work. lol i like cooking in my free time better. without deadlines and being stressed out. lol

hahaha i know what you mean, i have tomorrow off so im pretty stoked to have a break. im a short order cook at the monkey top. lol its a cowboy bar and grill. the bar can seat up to three hundred people inside and outside, so it can get stupid busy. and i fucking hate cowboys. >.> i am constantly being tormented by country music. >.> lol where do you work?

got my klausuren back :D biology was.. uhm xD haha not that good but seems to be normal by now ^^ not my best subject ^^

yeah consistent summer weather is exactly what i'm looking for too -.- but it's getting better by now I guees.