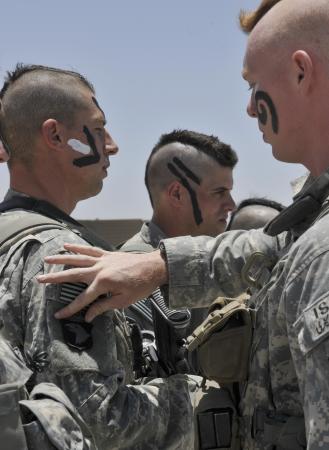 For the 66th anniversary of the D-Day invasion, while deployed in support of Operation Enduring Freedom X-XI, the Pathfinders of F Company, Task Force Eagle Assault at Forward Operating Base Wolverine, Afghanistan, paid special tribute to those original World War II Pathfinders of the 101st Airborne Division by giving each other Mohawk haircuts and painting their faces much like their forerunners had for a combat patching ceremony June 6. Paratrooper in the middle shows what a military-style Mohawk should look like.