NOT ALL MOHAWKED WWII SOLDIERS WERE PARATROOPERS 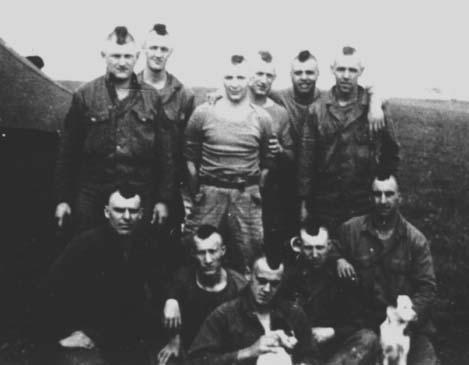 This historic World War Two photo is the only proof I have ever seen that paratroopers weren't the only soldiers in the Normandy Invasion who shaved their heads into Mohawks. These 11 Mohawked soldiers were members of Battery A of the U.S. Army's 225th Anti-Aircraft Searchlight Battalion.

They didn't join the invasion until five days after Mohawked 101st Airborne Division paratroopers jumped behind Nazi lines, Therefore it's likely they (like the rest of the free world) had seen the stunning photographs of the Mohawked 101st Division paratroopers splashed across the front page of the Army's Stars & Stripes newspaper -- and had likely adopted the haircut from that photograph.

That illustrates precisely how it was that the more famous Stars &Stripes photo sparked the worldwide popularity of the Mohawk haircut -- the first time most Americans had ever seen a Mohawk that wasn't on an Indian warrior.

One of the Mohawked soldiers in this photo, Lawrence P. Belmont, was quoted as saying: "Everyone who got their hair cut Mohawk-style, including me, got chewed out. They told us that if we ended up in the water it would be hard to pull you out as they couldn't grab onto your hair to save you from drowning.'" (Wrong, Dude -- actually the Mohawk provides a great handle to grab. Ask the Indians.)