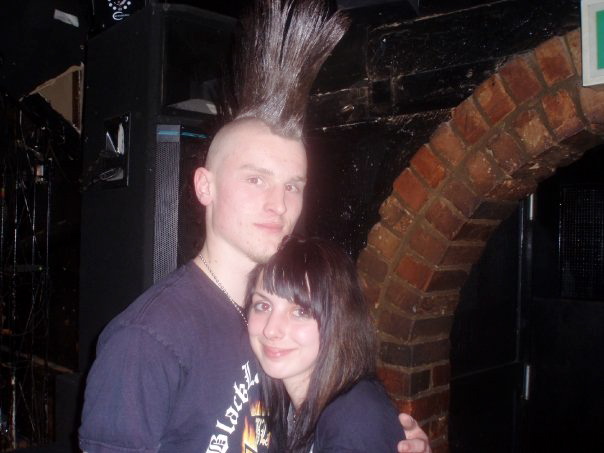 S.Y.P has not received any gifts yet

About Me:
i play guitar in a band called swallow your pride, were a mix of stoner metal with doom breakdowns, but i like all kinds of music just this is the funnest to play when your wasted!

i think mohawks arent just for punks but followers of all non mainstream ways of life.

How Tall Are You With and Without the Mohawk:
6" with the mowie flat and 6 foot 9?? with it spiked

Blast from the past - 5 years on.  Happy Birthday!  Your website link is down, it's been so long.

Any chance to see how you are these days?  How're things going with you?

Kobalos said…
Yeah, I know what you mean, we all move on from online sites at times. I'm spending less time to on here too.

Congrats. man! And to your band. Good to hear all your hard work and practice did it!

I've been both good and experiencing deja-vu with other folk. It's funny, how false folk can be and expect you haven't heard it all before. I went out last night, a bit boring, but at least good enough weather for it. Gonna get my hair bleached and blue, just waiting on some bleach atm.

Kobalos said…
I've not done anything really I feel worthy of showing on YouTube - most of the stuff I did was years ago. So, things have really improved!

Like in that clip for example. It's a rolling demo (like a film, but you can change things about them, like effects, or cameras) that's was meant to be realised last Autumn or so - but hasn't shown up yet. It was done to demonstrate a new techinique the company ATI (makes graphics cards) has, which lets them get really realistic scenes and objects in real-time.

Hopefully, it'll be available for download soon - they usually eventually release the demos all for free.

This is another one - which I do have, and if you have a good enough graphics card you can probably try it too. Nvidia Mermaid

You can see how it's interactive, the person is messing around making the hair float around as they shift the camera angle. You can also change the colour and length of the hair and stuff.

Kobalos said…
Sorry to hear about your borken foot - hopefully it's not causing you troubles now. Some K-Swiss can be not bad, depending on how they look. I get how you go for ones that are comfy though. Cheers, man!

Sorry, the link just needed copy & pasted, but here's it as an easy clickable one: Ruby CGI Demo

Great news on you winning! Good work! :D You're doing good to get to the finals. Get that practice in and go for the win!

Here's the latest demo as a video - it needs an ATI card, and they haven't released the demo as a program yet. But it's pretty impressive for real-time CGI - meaning you should be able to change camera angle as it runs without waiting!

Kobalos said…
I guess in a way I am going towards CGI - but I'm more game-orientated. Good CGI is way time-consuming, it takes minutes to render(draw) a single frame. Though now-a-days, some of the graphics CGI demos work in real time if you have a good enough graphics card. I always like playing around with those - since they're free - and that's where I'll probably be working on next, but I at the beginning of learning to do it. Mainly animaton and procedural effects are what I'm interested in. My profession was programming.

Would you mind if I ask what sort trainers or boots you like? Or some pics of rocking them with your spikes?

Richard Harding is now a member of Mohawks Rock
Nov 21
Welcome Them!