As much as I enjoy reading blogs and stuff I rarely post my own but I'll use this one to introduce myself at least. I'm a goth/Industrial/EBM fiend from so-cal. I'm also a political junky, software engineer, and gamer as well as occasional DJ for Goth/Industrial/Fetish events. My interests are pretty diverse, aside from the above. I like History, especially stuff on the middle ages and ancient history and have a thing for ancient religions. I am also a political junkie so not only do I commit… Continue

soo i found some purple dye in my bathroom. went to the store to get bleach and green, no green but YELLOW! so its purple and yellow for meee! yeah i am bleaching my whole head right now including the sides..i have never done this and it feels rather odd :) ill post pics when im done

"Alleyways stinking of piss, beggars in every doorway, straights and students coming to look at the freak show, and all the idiots saving all week, saving their stupid money from their stupid idiot jobs so they can come and shoot their load with some stranger."

Kids, you arn't missing much.

Protect your self-esteem, don't join us all in the cruising grounds, in the pathetic excuse for a scene, in our single minded search for a quick shag, to satisfy our egos, to make us… Continue

Most of us will have heard of Generation X. It’s used to describe the generation of young adults in the 60’s and 70’s who were the pioneers of a new way of living.

The young people of Generation X opened their eyes and their minds, and began to see the world in a whole new light. They began to look at the world around them, to question it’s impact on them. They learned not to accept what they were told by those in power, an idea which fundamentally led to the destruction of the… Continue

A letter sent to the Daily Mail following the introduction of the 'mosquito' youth control device, on behalf of the punks of Britain...

Following recent press criticism of the younger generation, I would like to point out that some of us have manners; know how to pronounce 'hierarchical', and it's meaning; we are able to understand discourse theory; we can hold debates; run conferences; campaign for our rights, and take what is rightfully ours, from a generation… Continue

The story of me being duct taped to a ceiling.

Alright so this was when i was located in cali. I wanna say roughly 10 months ago. Anyways i was hanging with my usual group people. We did some drinking. Went to a party that ended up being totally lame. So we took off after jacking all their duct tape and booze. So we head to my pal Anthony's house. Were drinking some more stuff. Then my pals hands me some tequila and vodka, i can drink both no problem, but i can't drink them mixed together. But they tell em to chug both. So i consider it.… Continue

So yes, this tattooing bidness is definitely a work on thought process. From what the tattoo will look like, to what kinda needle and grip to use, to color coordination(and it doesn't help that I have two artists who color differently...), to sterilization techniques and the proper way to handle cross contamination.

I fucking love this job!! Nothing is the same unless it's unoriginal, but we don't do unoriginal. We do custom and "fucking awesome" as me and PJ have come to call it. So… Continue

okay so i am completely broke and wanted to dye my hawk purple and lime green...anyone have any dye they wanna donate to me?

Within hours after reading that the moms of the Phoenix North boys' tennis team quashed the team's plan to wear mohawk hairstyles - their opponents - fifth-seeded Ironwood Ridge showed up with mohawks for Tuesday's match.

With the new look, Ironwood Ridge won five of six singles flights, with North getting its only victory in the first flight from freshman standout Vlad Mihai over Tim… Continue 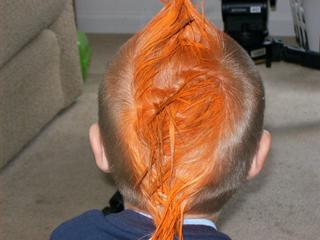 Its almost becoming old hat these stories of crushing individualism and pre-school teachers knowing more about how to raise a child than the parents. Still, the video link below shows a pretty rocking kid in a cool mohawk running and jumping around the house.. so that part is fun.…

Not sure how this has slipped under our collective radars, but the Washington Capitals are doing a promotion called "Rock the Hawk" in their playoff games against the Flyers. There are special T-shirts by budweiser and a radio station giving away tickets to fans willing to shave a mohawk.


I am creating a group and photo album for this promotion, so if anyone knows of anyone who did this, definitely tell them about it and I'd love to see pictures and coverage of this event. So… Continue Mr. T is releasing a limited edition 4,000 print graphic novel this Spring. It is now available to buy from his website at www.mohawkmedia.co.uk.


In the novel he plays a bodyguard who carries a business card stating “Next to God there is no better protector than I”.… Continue

Flames Mohawk it up in Calgary Still seeing if I can find a picture of them all together but apparently 7 players from the Calgary Flames including the two team captains, shaved mohawks as they entered the playoffs. I don't watch a lot of hockey, but think I may have a team to follow this year.

I haven't put my hair up since that last blog post. =(

I haven't had a haircut either. The sides have grown out to an inch and a half. I need to get a trim, and re-bleach the middle.
This mohawk is the thinnest one I've ever had, it's about 2 inches wide... It's also approaching being the longest I've ever had.

I'm not sure how this is going to affect the Knox process of putting it up, but when I finally get the sides trimmed, I'm going to attempt making more of a gel… Continue

Healthcare, IT and Mohawks

Finally got around to re-designing and launching my personal site/blog.


Yeah, thats a jumble of a mess of topics, and not at all related to Mohawks, but I guess we all wear a lot of different hats.. err.. hairstyles. Just figured I'd toss that out there in case anyone was interested in those… Continue

I have moved the members box to the top of the main page, so that more of us could show up there.

Looks like the max I can get up there is 27 people. Just so everybody knows, the site puts people up there based upon activity on their profile. I believe when you log-in and when someone comments on your page, it cycles you up to the top again. Just didn't want anyone think I was playing favorites.

I've also moved the activity bar up to the left, so you can try to keep up… Continue