Well I just wanted to wish you all a Merry Christmas! Hope you all have a fantastic day!

Do i look like a designated babysitter to adults or something?

...Wow. This blogging thing seems to be addicting. And it seems really pathetic of me. But hum ho bum, i'll do it anyways. So now apparently I'M the free-designated babysitter for neighborhood parents when they wanna get trashed. Is my social life so down the toilet bowl now that they automatically think i can watch there kids whenever. Well it is only 3 tween girls...but they are very loud and annoying. wow. come to think of it.....i am pathetic..oh. i think...i think i'm gunna go. i don't… Continue

Ever had that horrible mood or feeling or just moment in life that it feels like everyone's having fun at your expense? God. This whole month has been like that for me. And it sucks. I can;t even begin on saying what i feel. And no ones gunna look at this so..i guess its fine to just say "nothing. im fine" adn to get over it. I just needed to say something. Sorry. Yep another pointless blog.

k.. so here goes i was having a bon fire with some friends. we wer burning some dried weeds and wood but they didnt urn fast enough so.. we poored gas on it..i liked wat happened.. so i tried to do it... but theres a catch... i had the idea that if i help the gas cup just over the fire and blew realy hard that it would look like i was breathing fire.. i was terribly wrong.. instead the all the gas caught on fire including in the cup and i paniced and started shacking the cup like crasy..DUMBEST… Continue

I just received this story of a man testing taser gun effects. I spruced it up with some images to real bring the effects of the story to life.

Author: unknown (or hidden for protection)
Pocket Taser Stun Gun, a great gift for the wife.

Last weekend I saw something that sparked my interest. I was looking for a little something extra for my wife Julie. What I came across was a…

It was fun, I have to admit

Hola, world of MohawksRock! It's your friendly tattoo apprentice Nich here to give you an update to what life's been throwing at me.

Well, as it stands I am now able to work on clients after nine months of hard work and a lot of cleaning and bitch work. I am very pleased at my results and hope that I only improve. I'm only allowed to work on small stuff but that's more than enough reason for me to get excited for the fact that I get to work on PEOPLE! Still have a long way to go but… Continue

The show went on!

Okay. Bolt Action Beaver, City in Ashes, THE LOST CONCEPT, (and another band that i couldn't understand the name of). SO the original concert i was gunna see canceled on us, so we were all pretty bummed but then The Downstairs decided that the show must go on. And they got a couple of other bands to show. Which was AWESOME!!! I'm really pumped from it. Haha. But the point of this blog was that: I GOT HUGGED BY THE DRUMMER OF THE LOST CONCEPT!! And alll thanks goes to my best friend ANNIKA!!!… Continue

YOU KNOW THE TUNE
sing it! 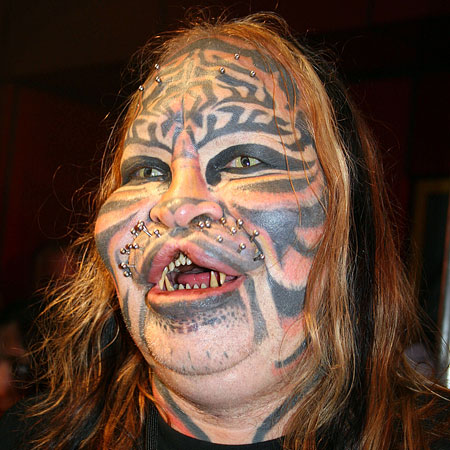 Stalking Cat, aka American computer repair man Dennis Avner, 50, is the world's 'most modified man' and has had surgery to create a feline cleft lip and a flat, upturned nose.

Pissing In The Wind

This one is also on my player, i love thoughts and opinions!

CH So here we are, our faces in our hands once again
All of our efforts in vain, we're pissing in the wind

V2 Now you say you wanna walk out of my life
And darling, i don't seem to care
A man can only apologize so… Continue

This one's also on my player...

V1 There are times in my life i've been beaten
I've been kicked been battered and bruised
Times I've been cheated, at times mistreated
And times where i've been used
But there comes a time where we all define
These other times and there's no polite words for you!

CH So call me a bastard and a heartless backstabber
I hope that this message reaches you well
Up yours! I'll see you in hell!

Here's another one i wrote, this one's on my player if you care to hear the music along with it, its a live recording so bare with the intro stuff...

Here's a song i wrote a while back, i love thoughts and opinions...

CH I raise my glass high and drink… Continue

At Vandalia high school, life is fairly simple for us. We have a very basic routine, and according to the majority of the students, we live a boring town where nothing happens. Most of our days seem drug out and uneventful. It seems that in the rare occurrence of a fight or brawl, it becomes the peak of gossip and hallway-talk for days. This, for the most part, is as bad as things get around this area. Most of the schools are fairly small; anywhere from a few hundred to several hundred… Continue

Am I the only one?

Everyone here seems to write about all the shit they get about their hair or clothes. Well, a lot of people here anyway. Am I the only one who doesn't get any shit about how I look? And yes, I do look different. People never say anything bad about my hair to my face, what they say behind my back doesn't bother me so I don' think that counts now :-) But no one has ever threatend to cut my hair or anything. They mostly just ask me stupid questions. "Is that your real haircolor?", "Is that your… Continue