has this ever happened 2 anyone

the end is nigh

shit oh well.. on Oct 25th, the day after my birthday, my mother will unfortunately shave my hawk.. ive had to many fights with my family about my hair.. and unless by some freak twist of fate/petition/nuclear war/plague .. ill go from mohawk to nohawk.. even after going out for lunch with her yesterday and having her see the amounts of compliments i get, she still picks fights about it.. yes im turning 26 and it should be my choice, but in an afrikaans family you do as you are told or you just… Continue

What to do when your not wearing it up?

when im not wearing my hair up, i just let it be. but im staring to not like it, it kinda seems like i have a bad haircut. any suggestions on what to do when its not up? ive tried combing it over but it just falls back infront of my eyes again. and it looks dumb if i try to tie it back because its not really that long to where i need to tie it back lol. any help would be appreciated thnx

why does she hate me?

i know i'm almost 30... and i shouldn't be whining about how much i hate my mom. and most ask "how could you hate your mother"
two words "she's abusive"
always has been (good english i know), ever since i was a kid.... granted she hasn't hit me in about 10 years, doesn't mean she still continues her mental attack.
controlling is a better term for her.
nazi maybe
i don't know why i'm bitching here about her, maybe just to get things out that are bottled up.
i just… Continue

Last week I bought four death videos from Chavez Video. Faces of Death 1 & 3, Death Scenes 2, and The Many Faces Of Death. My plan was to watch them all in one chingaso, but I just got a vcr and I haven't seen the last one yet. So far the death scenes one is the scariest. To be fair, at night they are FAR more terrifying. The scariest one I've seen was my first one, Traces of Death. I was all sad when Movie gallery sold it. Probably to some stupid piece of shit.
I kinda want my death… Continue

I shaved my hair!

Well at least on the sides that is. I must say I really do like the way it looks and I think that the look suits me but also I don't really care for it because of one thing that I never took into consideration when shaving my hair. Which would be that my head is fucking cold as hell. I miss my hair on the side of my head. To make matters worse since I have shaved my head the weather where I live has been really cold and rainy and stuff. I am kinda getting used to the cold but now I know why old… Continue

I need some stronger stuff!...My Mohawk is like 2-feet now!!!

Does anyone here have any suggestions as to what I can use to keep my mohawk up!? I haven't updated my pics. recently,as you can tell...but on another note,I've used 3 different hairsprays together,a comb,and a Blow Dryer to do my mohawk before,but now...it just won't help as much. Can somebody help me out here,I would really appreciate it.

I gots a gf xDDD

Ok so I handt had a gf in a while! I moved here to Deer lodge, (Close to oak ridge) like 3 years ago, and just wanted to be home schooled so I can graduate early. And well. I meet this super rad girl at a football game (Cause my bro goes to normal school) And we just started talking, and blah blah blah, a wish on 11:11 came true (For both of us) weeeiird, and were dating now.
Oh and she has a hawk xD.
Goodness shes so great xDD iam so happy!
But it sucks cause Iam 17, my mom is… Continue

Something i find funny.

Due to several times when i was out and about all by my self i have come to notice how people tend to act in the presence of something that is not the social norm. Having been raised in a somewhat religious retirement town everyone seems to shy away and/or make random comments about the way ones physical appearance is. Truth be told.....when i was younger i might have done the same or stared at someone. That was when i was little though and mostly still curious. I expect something like that… Continue

A Barbershop For Social Beasts In Los Angeles, USA 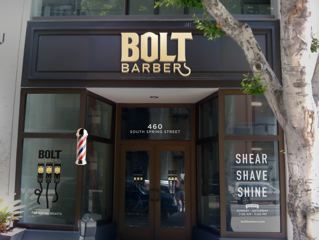 BOLT BARBERS™ is an Old School but never Old Fashioned
Barbershop practicing the worlds oldest profession: Barbering. BOLT BARBERS welcomes Guys aged 2 to 102 into our space to hang, chill, chat, and oh by the way get hooked up with awesome tapers, fades, pomps, line-ups, hawks, military cuts, biz man cuts, or any other cut imaginable. Our team of skilled artisan barbers practice with passion, the craft of shearing & shaving. And our skilled… Continue

I am seriously bored and trying to figure out what to do to kill time... If anyone has ideas about what colors or whatever I should paint on my head, it'd be greatly appreciated.

this site is making me sick

whos site is this